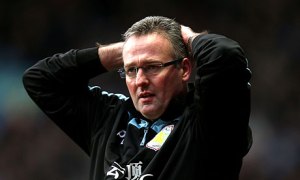 Premier League lost its one remaining Scottish coach. Since the 1950s, gruff Scottish geniuses have been a fixture in English soccer, engineering memorable league campaigns and delivering pithy sound bites. Lambert, a mediocre coach with all the charisma of a wrinkled warm-up bib, has little in common with Matt Busby, Bill Shankly and Sir Alex Ferguson. But his sacking, the inevitable result of one of the longest goalless streaks in Villa’s history, carries symbolic weight. Over the last few years, as long-serving coaches like Shankly and Ferguson have become increasingly rare, what might be termed the “Scottish model” of sustained team-building, in which a visionary manager molds a squad over the course of several seasons, has given way to a new reality: a cutthroat league in which players and coaches never stay at one club for very long.

The Premier League’s growing volatility is especially pronounced at Manchester United, once a bastion of stability in the rapidly changing landscape of English soccer. In 2013, after 25 years in the Old Trafford dugout, Ferguson retired from coaching, and his final act as United manager was to anoint fellow Scotsman David Moyes as his successor. Ferguson, who saw traces of his own Glaswegian toughness in Moyes’ no-nonsense coaching philosophy, naively assumed that fans and journalists would wait patiently for the ex-Everton manager to blossom into Sir Alex 2.0. They didn’t, and less than a year later, Moyes was fired.

United’s efforts to recapture its old dominance have involved exactly the sort of training-ground turnover and indiscriminate spending Ferguson abhorred. Last summer, rather than hire club legend Ryan Giggs, who took over from Moyes for the final weeks of the 2013/14 season, United recruited a big-name European coach, Louis van Gaal. The club then went on an absurd off-season spending spree, signing high-profile attackers like Angel di Maria and Radamel Falcao, as well as 19-year-old left-back Luke Shaw, whose astronomical wage demands had scared away his other major suitors.

United is hardly alone. These days, training-ground turnover, and the indiscriminate spending such changes frequently generate, is endemic to English soccer. Jose Mourinho has forged a tremendously productive career by stringing together three-year stints at clubs rich enough to sign new stars every summer. The 24/7 sports media rewards short-term achievements – the record signing, the five-game winning streak – at the expense of the steady player development Ferguson championed. In the Premier League, only Arsenal has employed the same head coach for the last five seasons, and once Arsene Wenger retires, the club will almost certainly replace him with a Mourinho-like mercenary.

We will probably never see another dynasty like the one Ferguson built. This season, United’s big names have underperformed: Shaw rarely completes 90 minutes, di Maria seems bored, and Falcao appears to be playing walking football. If United fails to qualify for the Champions League, van Gaal will be fired, and some other famous tactician will take his place. Maybe next year, bolstered by another wave of new signings, United will challenge for the title.

It remains unclear whether the profligacy of England’s top teams is sustainable. Financial Fair Play has imposed major spending limitations on clubs like Chelsea and Manchester City, whose transfer funds come from billionaire owners rather than ticket and merchandise sales. But over the last two seasons, Mourinho has managed to move players in and out of Stamford Bridge while keeping his net spending under control. Last month, he sold wingers Mohamed Salah and Andre Schurrle to fund the purchase of Fiorentina’s Juan Cuadrado.

And FFP is unlikely to create significant problems for United. The club, whose financial woes have been greatly exaggerated, recently struck the most lucrative kit deal in soccer history, and its annual revenue is incredibly high.

United can afford to play this game. But for smaller teams like Aston Villa, which has sacked four coaches in the last five years, the risks of constant turnover are stark.

Lambert’s Villa went nearly seven games without scoring a goal. But what if incoming coach Tim Sherwood – who, like most Premier League managers, will probably insist on buying “his own players” – turns out to be a bust? Unlike United, City and Chelsea, Villa doesn’t have enough money to rebuild every couple of seasons. Despite Lambert’s failures, the club should consider investing in an old-fashioned Scotsman.