Age of the Deuce

The usual line on Clint Dempsey is that he’s underappreciated in his home country – that, in the United States, it’s 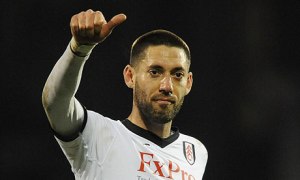 Landon Donovan, not Dempsey, who symbolizes a sport many Americans don’t take very seriously. There’s certainly something to that. Donovan’s on-and-off relationship with reality TV star Bianca Kajlich cemented his place in the wider world of American pop culture; Dempsey is an “avid fisherman.” Donovan feuded with David Beckham, then made up with him, then won a couple of trophies; during his last year at Fulham, Dempsey meshed well with Belgian midfielder Moussa Dembele.

In England, it’s another story entirely. Dempsey, regarded as one of the Premier League’s most dangerous attackers, regularly scores goals for Tottenham Hotspur. By contrast, Donovan’s forays into European football have rarely convinced – he performed well during his first loan spell at Everton, but Major League Soccer’s ridiculous transfer rules precluded a permanent move, and Tim Howard is way more fun.

END_OF_DOCUMENT_TOKEN_TO_BE_REPLACED

Even Though His Team Lost To Fulham

It’s raining, and Andres Villas-Boas is getting wet. He’s squatting, but rain is trickling down the arc of his back, and

supporters in the stands are mocking the whole pathetic spectacle. He’s wearing a heavy, Wenger-like coat, but it doesn’t matter, because dampness is definitely in this guy’s future – you can just tell.

Watching AVB try to turn stodgy, defensive Chelsea into a genuinely entertaining football team was sad in a way that could’ve been kind of funny – but wasn’t. And it always seemed to be raining.

When Villas-Boas signed for Chelsea, he was young, energetic, and so enthusiastic about 4-3-3 that he made the whole notion of an attacking trident seem way more exciting than it was ever going to be. AVB’s treble-winning season at Porto marked the peak of football’s obsession with the Mourinho-esque Euro-snob manager: as Grantland’s Brian Phillips put it, you couldn’t “mow a field in the Iberian Peninsula without finding six or seven sharply dressed and tactically savvy managers under toadstools and rocks.”

END_OF_DOCUMENT_TOKEN_TO_BE_REPLACED

Because It’s Been a Bit Quiet Lately

Here’s what I’ve been doing elsewhere:

And some Tottenham Hotspur analysis

And a picture of Jan Vertonghen pretending to grab something.