The best football coverage around…

The first two parts of James Horncastle’s series “The Battle for Manchester”:

From a while ago: Andi Thomas on Barcelona, racism.

Alexander Netherton on the Championship.

Brian Clough, a master of bombast and king of quirky one-liners, always held the media spellbound, but the scale of his

influence is better conveyed in his prominence now than it ever was when he was alive.

Clough has been the subject of countless biographies, a novel and the film made from it. He won two European Cups with a provincial club and steered Derby County from the middle of the Second Division to the top of the First. He is, supposedly, the best manager the English national team never had.

In recent times, though, the media has concerned itself more with Clough’s most notable failure – his infamous 44-day stint as manager of Leeds United. David Peace’s The Damned United famously novelizes that ill-fated spell, portraying Clough as an enigmatic and self-destructive obsessive, haunted by the successes of his predecessor. Peace’s short, abrupt sentences are intended to mirror Clough’s thinking. While entertaining to read, that approach to understanding Clough is flawed. It casts him as a caricature, an exaggerated parody of a manager who, while eccentric, was always as human as the next man.

END_OF_DOCUMENT_TOKEN_TO_BE_REPLACED

For Arsenal supporters, it has been a season of despair. Bad enough that new signing Gervinho was sent off during a 0-0 draw 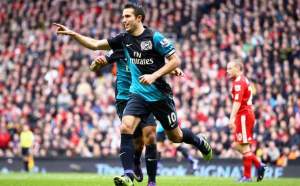 with Newcastle on opening day, but continued squad upheaval quickly obscured even that disaster. Fabregas delayed his departure long enough to convince many that he meant to stay, while Nasri’s move to City left an understandably bitter taste. Wenger’s response — a five-signing spree on deadline day — reeked of procrastination and left onlookers grumbling about a preference for quantity over quality.

By early winter, Wenger looked gaunt and frail, totally consumed by his cavernous rain jacket. Asrenal’s failure seemed to leave him more sad than angry, too resigned to his team’s fate to muster even a scowl. He lost faith in the team, so the fans lost faith in him.

The growing discontent crystallized when, at home to Manchester United, the Emirates crowd jeered Wenger’s decision to replace Alex Oxlade Chamberlain with Andrey Arshavin mid-way through a competitive second half. In a post-match interview, Wenger babbled about his experience and said he had made “thousands” of substitutions before.