“As a manager, you just ignore your family 24/7 when you do this job, and it’s time for me to give the family a little bit of time,” Allardyce said after West Ham’s 2-0 loss to Newcastle, adding that he plans to fly to Spain next week to vacation with his grandchildren.

I can already picture Allardyce in some Spanish park, furiously punting long-balls to his grandson as Barcelona’s academy team plays keep-away on an adjacent field. But perhaps today’s interview was all an elaborate ruse. Might Florentino Perez have secretly tapped Allardyce, who once memorably claimed he was “well-suited” for the Real Madrid job, to replace Carlo Ancelotti in the Bernabeu dugout? We’ll just have to wait and see.

For Better Or Worse, It’s That Time Of Year 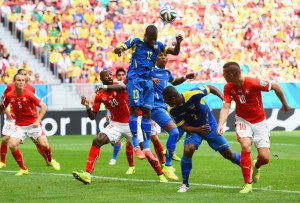 Cup of all time, and football fans are already moving on. The tournament was terrific (9.25 out of 10, according to Sepp Blatter), but let’s be real here — July is all about the summer transfer window.

Yesterday, Ecuadorian striker Enner Valencia, whose gravity-defying leaps made him a star in Brazil, underwent a medical at West Ham; he’s expected to sign a contract later this week. In other words, while the rest of us reveled in Germany’s midfield dynamism and Holland’s speedy counterattacks, Sam Allardyce spent the last month scouting the South American Andy Carroll. Welcome back to the Premier League, everybody. Welcome back.