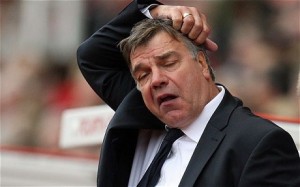 “As a manager, you just ignore your family 24/7 when you do this job, and it’s time for me to give the family a little bit of time,” Allardyce said after West Ham’s 2-0 loss to Newcastle, adding that he plans to fly to Spain next week to vacation with his grandchildren.

I can already picture Allardyce in some Spanish park, furiously punting long-balls to his grandson as Barcelona’s academy team plays keep-away on an adjacent field. But perhaps today’s interview was all an elaborate ruse. Might Florentino Perez have secretly tapped Allardyce, who once memorably claimed he was “well-suited” for the Real Madrid job, to replace Carlo Ancelotti in the Bernabeu dugout? We’ll just have to wait and see.

The Curse of the Michael Jackson Statue

Mohamed Al Fayed gave a slightly bizarre interview today in which he claimed, among other things, that 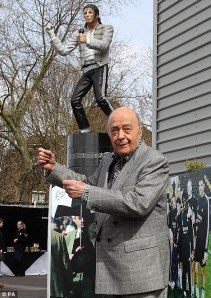 “The new owner will regret it because I warned him,” Al Fayed said. “I said, ‘You will pay with blood for that,’ because it was something loved by the people. He’s been relegated and if he wakes up he’ll ask for Michael Jackson again, and I’ll say ‘No way.'”

I once posed for a photograph in front of the MJ statue, so I am definitely qualified to judge the validity of Al Fayed’s theory. And I think he might be onto something.