De Gea Risk Must Come Off For United 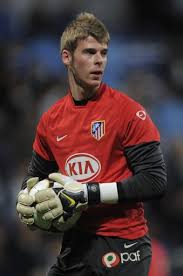 For United fans, the memories of Sir Alex’s last goalkeeping search are ones best tucked away into the same drawer that houses their last two European Cup finals. With Peter Schmeichel departing, United had the mammoth task of replacing one of the best of all time, something they failed miserably at until a certain Dutchman came in to save the day.

Hoping to have learned from past errors, Ferguson entered goalkeeper search 2.0 this summer following the retirement of the man who finally did replace Peter Schmeichel; Edwin Van Der Sar. Van Der Sar’s time at United was silver lined, four Premier League titles rolled in, complemented by one in Europe, as Van Der Sar’s save in the Champions League final shootout of 2008 brought United their third ever European Cup.

The number of names linked to the newly vacant goalkeeping post at United was unprecedented, it seemed that every goalkeeper who had made one fantastic save in the last decade was a potential target. A few years ago, there was Igor Akinfeev at CSKA Moscow, and more recently, big names like Manuel Neuer, Pepe Reina and Gigi Buffon. However, as is his wont, Ferguson elected to go with a young gun, Spanish U21 international David De Gea.

There is no question that De Gea has potential; he saved a penalty brilliantly in last year’s Uefa Super Cup, and has carved out a decent reputation for himself in La Liga, but is it really an intelligent move for United to go with someone so young? Of all the positions on the football pitch, goalkeeper is the one which rewards youth the least; it is strange for a goalkeeper to peak before his early thirties. It could be with that in mind that Ferguson has chosen De Gea, after all, his best years are yet to come and Ferguson will want to insure that United are the team to enjoy them.

Ferguson found in his last goalkeeping search, that whether a player is young or old, experienced or inexperienced, they are still capable of dropping clangers; see under both the youthful Taibi and the veteran Barthez.

However, in the end it was a man of experience who came through for the Red Devils, Edwin Van Der Sar had already won a European Cup, and played for Juventus in the Serie A, before he signed for Manchester United. Supposedly in the frame for the goalkeeping post 2.0 were players that had starred in World Cups, won Champions Leagues, and even pulled off blinders against Ferguson’s men, yet it was a man still to play on Europe’s biggest stage who was chosen. De Gea’s impending signing sees Ferguson ignore his success with Van Der Sar, and take a risk on youth; though I guess, that is the Ferguson way.

But what the Scotsman may come to realize as the season draws on, is that promoting youth in the outfield positions is much, much different than placing it in goal. While a mistake put down to youthful exuberance in midfield often goes unpunished, one made in between the goalposts is always significantly more severe.

Last time I raised a concern about the prospect of De Gea joining United I was slated, so I want to make it clear this time that this should not be perceived as a damning verdict on the Spaniard’s career in the sport, merely a warning, that sending a man with only a season and a half of top level experience to his name into the boots of one of the greatest football has ever seen is both unfair to the player, and jeopardizing to the club.

Yes, De Gea might go on to blossom under pressure, rule the roost for decades, and vindicate Sir Alex, proving that his risk had payed off. Yet at the same time, the potential of disaster is there, the potential for another Taibi.

Will De Gea succeed at United?