In a season which was remembered partly for the woes of an under performing striker, one other struggling forward was barely mentioned. The trials and tribulations of Fernando Torres’ first season at Chelsea are well documented, his was a year to forget, one marked by a record transfer fee, but only one goal.

However, further North of London, there resided another man equally in need of a break; former Wolfsburg striker Edin Dzeko. Twelve months ago, when players like Sanchez and Young were hardly talked about in the context of a move, Dzeko was the main man, a supposed transfer target of every big time club, from Manchester United to AC Milan and back over to Barcelona. During that window, a transfer did not materialize, but Dzeko needed not worry, within six months he would have his move; to moneybags Manchester City. Already boasting strikers like Carlos Tevez and Mario Balotelli, playing time at City was anything but guaranteed, yet, we all thought that the brilliant Edin Dzeko could handle it, that he would be the next big thing to rock the Premier League.

Edin Dzeko’s nose dive from so hot to so not was a quick one. After impressing in a home game against Wolves, he flopped away at Aston Villa, in a match which was marked by the debut of another big money signing; Villa’s Darren Bent. From then on, Dzeko found that first team football was a difficult thing to find, and while the big Bosnian racked up a handful of goals against opposition like Notts County, Premier League strikes were a precious commodity which he just couldn’t attain. It took Dzeko until the twenty-fifth of April to find his first League goal, a winning one, against Blackburn Rovers.

With the season winding down, Dzeko only played one other consequential part, scoring in a virtually meaningless match at the Reebok on final day, a confidence booster but one which is unlikely to be remembered. 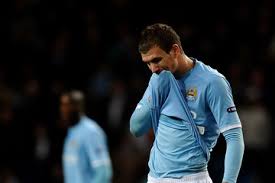 And so the season ended for Dzeko and City, the latter much happier than the former, but hopes still abides within Dzeko, next year he will have the chance to make an impact in the Champions League; a stage which he excelled on when playing for Wolfsburg.

“Form is temporary, class is permanent” goes the saying, and I think that Dzeko has class, the perdurable kind. The Bosnian has a wonderful touch for a big man, but is also dangerous in the air, once he fully catches up to the speed of play in the Premier League, he’ll start to bang in the goals.

Next season, Dzeko may end up playing a much greater role than he did in 10/11, Balotelli is ever inconsistent; and Tevez has still refused to commit either way as to whether he will stay or go. Yes, at the moment, Dzeko is really the only City striker with a clear cut future, even after suffering from such a lack of form last season.

When City kick off against Swansea in August, you can be sure that the likes Dzeko will be complemented by further attacking gems, after all, City have never been particularly shy in their transfer dealings.

Sanchez perhaps, could be the man to set up Dzeko’s first goal of the new season, and who knows, it might be Modric who he goes to celebrate with! Whatever the supporting cast, mark my words Dzeko will be a star, class is permanent and the man from Bosnia has plenty of it.