On Saturday, Poland beat Germany 2-0 in a European Championship qualifier. The general consensus seems to be that the match was really, really important: it marked Poland’s

first ever victory in a fixture freighted with historical significance and ended Germany’s amazing seven-year unbeaten streak in qualifiers.

But here’s the thing: UEFA’s controversial expansion of the Euros, one of the few international tournaments that consistently features exciting soccer, pretty much guarantees that powerhouses like Germany and Spain, which lost 2-1 to Slovakia on Thursday, will qualify. This week’s upsets were exciting to watch – but in terms of the Road to France ’16 (or whatever we’re supposed to call the qualification campaign), they were completely meaningless.

Reflecting on the Euros: 15 Things We Learned

1.      It’s getting harder and harder to host- In recent years, FIFA and UEFA have made a lot of noise about the

importance of spreading football around the globe, encouraging traditionally unsuccessful football nations to host international tournaments. It’s no surprise, then, that, despite a couple of glorious moments, this year’s hosts were both eliminated before the first knockout round. After all, neither Poland nor Ukraine is one of the best eight teams in Europe.

Wild expectations don’t help. After Poland’s disappointing 1-1 draw with Greece, Francizek Smuda claimed that his team had been “paralyzed by pressure.” Ukraine looked similarly disabled against England, though a controversial goal-line decision provided them with a readymade excuse.

2.      Holland are still unreliable- Almost 40 years after the 1974 World Cup final, Holland are still masters of self-destruction. First, their pre-tournament preparation was marred by a dressing room argument over whether certain black players had been racially abused by someone outside the squad. Then the team imploded against Denmark, Arjen Robben forgot how to shoot, and Robin Van Persie reverted to, well, Robin Van Persie-at-the-2010-World-Cup-form. Holland exited the Euros without a single point, and Bert Van Marwijk resigned soon thereafter.

END_OF_DOCUMENT_TOKEN_TO_BE_REPLACED

Look under the letter “G” in football’s coffee-stained, dog eared lexicon. Run your finger down the page, past 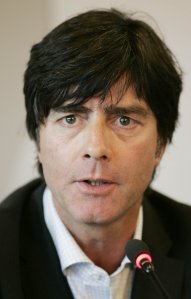 “Garrincha,” past “Gascoigne.” Stop. Squint closely. Absorb the clichés, the fallacies, the half-truths, the stereotypes, and the crass World War II references. Shut the book. Burn it.

The Germany of the lexicon are efficient and pragmatic, the big bullies who nicked Johan Cruyff’s lunch money.

For fans and the media this traditional picture of a German footballer – quiet, serious, stolid, ice-cold – is a comfortable, self-perpetuating myth. The more the public believes that all German footballers are cold-hearted killers, the more reality seems to conform to that belief, even if the belief is blatantly erroneous. Terms like “German efficiency” are standard football vernacular. But anyone with a background in German football history knows that the truth is more complicated. And anyone with eyes can see that Joachim Loew’s Germany are hardly an emotionless winning machine.