Soccer fans get really upset when players and coaches don’t shake hands with the other team. Remember the 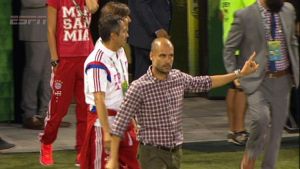 The first #handshakegate of the new season comes from a surprising source: Pep Guardiola, the anti-Mourinho, the guy widely regarded as the classiest manager in European soccer. At the end of Wednesday’s MLS All-Star game, Guardiola refused to shake hands with MLS coach Caleb Porter, because he resented the All-Stars’ aggressive tackling.

In other news, the Premier League’s new concussion protocol does not empower independent doctors to decide whether injured players should reenter the game. It’s time we started complaining about an actual disgrace.