Cristiano Ronaldo is supposed to have it easy. He dates beautiful women, collects an exorbitant salary and plays 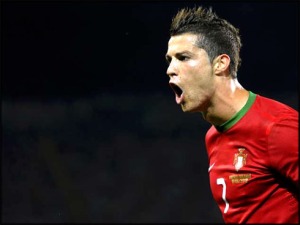 professional football for Real Madrid. No one complains anymore about his arrogance or his theatrics. After another immense season, he’s earned the right to say and do what he wants. Yet Ronaldo somehow seems unfulfilled. A lurking suspicion remains that the Portuguese international just isn’t as good as he seems to be. On Thursday, those doubts grew when Ronaldo missed a series of gilt-edged chances in Portgual’s 3-2 victory over Denmark. In the white of Madrid, critics said, he would have scored at least twice.

Maybe all this has something to do with Ronaldo’s rival and footballing antithesis, Lionel Messi. If not for Messi, Ronaldo would, indisputably, be accounted the world’s most accomplished footballer. Instead, he’s an awfully talented narcissist defined by the one player who is better than he is. Indeed, for a player of his stature, Ronaldo has won relatively little – especially compared to his sparkling contemporaries. Messi and Barcelona’s other insufferable perfectionists have twice denied Ronaldo the Champions League — once when Ronaldo played for Manchester United and once when he played for Real Madrid. Xavi and Iniesta, neither a member of the pantheon to which Messi and Ronaldo belong, have each won more silverware than the Portuguese has.