How Angry is Philippe Mexes? 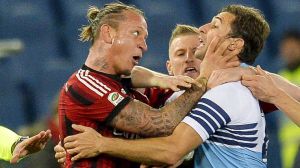 possibly in a coordinated attempt to restore the Magic of the FA Cup – Milan’s Philippe Mexes received the 16th red card of his professional career after trying to strangle Lazio midfielder Stefano Mauri. Mexes, who once scored this ridiculously cool bicycle kick, is now just three dismissals shy of Sergio Ramos. “Has there been an angrier footballer anywhere in Europe this season?” BBC Sport recently wondered.

I’m hoping Mexes eventually surpasses Ramos, because the Magic of a Mexes Red Card makes the FA Cup seem like waste of time. But is he really the angriest player in Europe? I’m not convinced. For me, the title belongs to City captain Vincent Kompany, who looks angry even when he’s happy.

It was a good day for the noble art of the narcissistic goal celebration.

First, in the Premier League, Southampton’s Dusan Tadic flexed his abdominals – I think the medical term is “the Balotelli muscles” – after scoring in a crucial game at Old Trafford.

Then Francesco Totti took a quick selfie in front of the Curva Sud to celebrate his equalizer against Lazio. “I thought about it during the week,” Totti told Sky Sports after the game. “There is this fashion for selfies now.”

There is this fashion for selfies now. I’m torn between admiration for Totti’s ballsiness and despair at his apparently sincere embrace of selfie culture. At least he kept his shirt on.