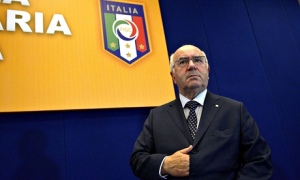 he got, only to return three years later to escape the not-racist-but-still-pretty-awful English press.

That problem just got a whole lot worse: Earlier today, Carlo Tavecchio, a bona fide racist, was appointed president of the Italian Football Federation. In July, Tavecchio said he hopes to strengthen the rules governing non-EU players, so that Africans “who previously ate bananas” can’t insinuate themselves into Serie A.

Tavecchio won 63 percent of the vote. I think it’s time for Balotelli to move back to England.