After a year of mediocrity, Andrei Arshavin is approaching something close to top form. 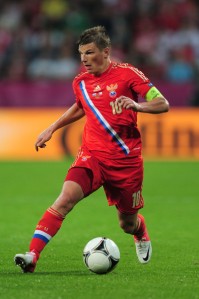 In the fall of 2009, Andrei Arshavin had the world at his feet. His quadruple at Anfield, a goal-scoring feat that ultimately helped Manchester United more than it did Arsenal, was still recent history. He was quickly becoming one of the game’s most recognizable stars, just in time for the 2010 World Cup.

But Russia, coming off a hugely successful European Championships, didn’t qualify. They finished second in the same group as 2006 semi-finalists Germany, earning a straightforward-looking play-off against Slovenia. Russia won the home leg 2-1, but lost 1-0 in the return fixture; they were eliminated on away goals. Humiliatingly, they finished the second leg with only nine men.

In truth, Arshavin had begun to fade before that loss. “Maybe my game did not look so bad from the outside, but inside I felt that I was not a part of the team,” Arshavin said after the first leg in Moscow. Even then, he understood what failure to qualify would mean for himself and for his country: “To stay out means to be on the sidelines of football for a time”.