The Beloved Autocrat: How Mancini Conquered The Fans

Since his arrival in the winter of 2009, Roberto Mancini has made quite an impression.

Maybe it was the cute Italian accent or the gradual improvement in City’s defense. Something 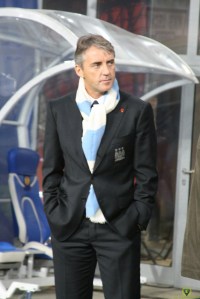 about Inter’s handsome former boss appealed to a set of fans still acclimating to their club’s financial and footballing altitude.

Or maybe it was the scarf. Perhaps Mancini’s initial wardrobe choice had nothing to do with the weather. During a period of tumult, the simple yet luxurious attire of Mark Hughes’ successor provided a blast from the past in sharp contrast with City’s constant talk of the future. City needed that. More than any of their million-pound playing assets they needed an acceptance of what used to be as they embraced bullish expectations of what had yet to arrive.