This Article Does Not Contain Fantasy Premier League Tips

The official Fantasy Premier League game has returned for the new season. This is not necessarily good

This year, the opening day of the fantasy football season, which always kicks off long before any actual teams take the field, marks an important milestone in the transition from the high drama of the World Cup to the rather less dramatic mid-July horse-trading of the summer transfer window. (The online football community seems to think that this transition should be carefully stage-managed, lest anyone suffer the psychological letdown that can accompany the end of major tournaments.) Earlier this week, Germany beat Argentina in the World Cup final; the memory of Gotze’s winning goal is still fresh, and pictures of German players consuming alcohol in interesting ways are still surfacing on the Internet. And yet the Fantasy Premier League is already open for business. For better or worse, it’s time to move on.

END_OF_DOCUMENT_TOKEN_TO_BE_REPLACED

This piece is by Paul Price, sole editor of The Technical Area.

It was a cold, autumnal Saturday evening in November 2005 in Geneva, Switzerland. With England having already 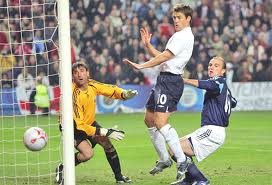 booked their place at the 2006 World Cup, they had the opportunity to pit their wits against one of the world’s best teams in a friendly match. But it wasn’t Switzerland that England were facing, it was the Old Enemy, Argentina.

International Friendly. There has never been such a match between these two nations. England-Argentina is a bitter rivalry that goes way back, as far as the 1966 World Cup in fact, when England manager Sir Alf Ramsey ordered his players not to shake hands with their Argentinean counterparts after a controversial affair. Then there was  the “Hand Of God” controversy in the Quarter Finals of the 1986 World Cup, where Diego Maradona used a clenched fist to send the ball beyond the advancing Peter Shilton. Add to that the 1982 Falklands War and you have a history that renders the term “friendly” quite ridiculous.