Ninety Minutes From The Sack 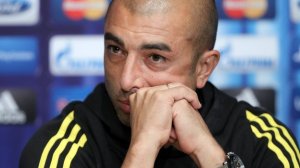 folded across bronze-Fergie’s chest, and while bronze-Fergie seems to be missing flesh-Fergie’s legendary watch, the sculptor looks to have done a pretty accurate job. Ferguson has coached United for more than 25 years. In that time, ten Liverpool managers have come and gone. Among the top English clubs (sorry, Everton), only Arsenal has a coach whose longevity rivals Sir Alex’s, and even he trails Fergie by a decade.

Ferguson is the last survivor of a dying era. Last month, Mark Hughes of Queens Park Rangers and Roberto Di Matteo of Chelsea were both fired after less than a year at their respective clubs. Hughes’ sacking came after a disappointing start to QPR’s season, but Chelsea won the Champions League earlier this year, and, at the time of Di Matteo’s dismissal, was only four points off the top of the Premier League. The team was also playing attractive football, which, for Chelsea – a club whose blunt, bullying, borderline-racist players[1] have been intimidating the West Broms of this world for about seven years – is not so much highly unusual as highly suspicious.

At least 90 percent of Di Matteo’s downfall had more to do with Chelsea owner Roman Abramovich and his bizarre, illogical management than it did with Di Matteo himself. Abramovich is an entertainingly shady Russian billionaire whose penchant for firing managers who probably don’t deserve to be fired has turned him into a bit of a cartoon enemy. There are probably lots of kind, humble Chelsea supporters who are deeply ashamed of their inability to hate Abramovich, and who spend at least a couple of minutes each day pondering this moral failure[2]. Without Ambramovich, Chelsea wouldn’t fire managers on a regular basis: his bizarre egomania forces the sackings, and his billions fund the big severance checks that departing managers take with them as a sort of consolation prize[3]. But remove Ambramovich from the equation, and Chelsea is a mid-table team. The Stamford Bridge faithful is obligated to love him.