When George Vecsey Went to Spain 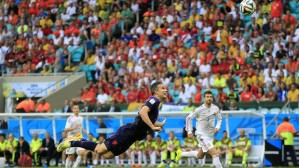 on the evolution of American soccer writing. It’s partly an account of The New York Times‘ coverage — well, attempted coverage — of the 1982 World Cup. The Times has sent 15 reporters to Brazil for this year’s tournament, but, as Curtis explains, it was not always thus: “The World Cup had no local hook — the U.S. team didn’t qualify. ABC Sports agreed to televise the final live for the first time, but refused to replay it two days later because the network didn’t want to preempt General Hospital.”

As I write, Chile-Australia is playing on ESPN2. We’ve come a long way.