Is Zlatan Ibrahimovic An Arrogant Asshole, Or Is He Just Pretending? 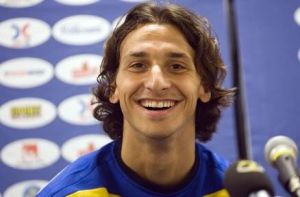 Borden that ran in Monday’s Sports section. It’s a good story, and it raises some interesting questions. For instance: Is Zlatan as conceited as everyone seems to think? Or is he just having a laugh? At one point, Ibra tells Borden about his two sons:

“‘I changed diapers when they were babies,’ he said, adding, ‘I know other footballer may not, but I do.’ Then he shrugged, as if slipping back into character. ‘Of course, I am very good at it,’ he said with a grin.”

In December, Zlatan claimed that “I don’t need the Ballon d’Or to know I’m the best.” Judging from Twitter, some people thought he was serious. Maybe now they’ll finally get the joke.

One thought on “Is Zlatan Ibrahimovic An Arrogant Asshole, Or Is He Just Pretending?”