You Should Watch The Africa Cup of Nations

The Africa Cup of Nations is profoundly confusing. Take, for instance, the star-studded Ivory Coast team: it entered 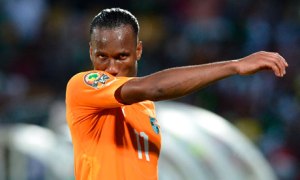 the last few ACONs as the heavy favorite, only to lose dramatically to feel-good teams like Zambia, which won the 2012 ACON in Gabon, the country where several of Zambia’s greatest players died in a tragic early-‘90s airplane “accident” that may or may not have been orchestrated by the Gabonese military.

Typically, football fans refer to the ACON – which used to be held during World Cup and European Championship years, but which is adjusting its rotation in an almost certainly futile effort to garner more prestige/viewers/Jonathan Wilson columns – as a “festival of football,” a term that’s rooted in the utterly erroneous, semi-racist perception of Africa as a place where tribe members chant exotic chants and bang exotic drums and just generally have a good time. (For reasons that don’t make very much sense, the whole concept of this, like, giant football party! gained popularity during the South African World Cup.) Of course, African football is nothing like that. After the first wave of Cameroon-got-to-the-quarters-and-Pele-thinks-Africa-will-win-a-World-Cup hysteria passed, Africans spent more than a decade dealing with corruption and white elephant stadiums and teenage stars whose “burgeoning talents” (or whatever) turned out to be figments of some gossip website’s imagination.

Which is why last year’s competition was so uplifting. For the first time in a long time, African football produced a story that was both genuinely moving and genuinely gripping. Zambia’s penalty-shootout victory over the Ivory Coast was one of last year’s most talked-about matches, and, despite Zambia’s recent struggles, people are still talking about it.

Unless they’re talking about Cape Verde, the smallest (population: 501,000) quarter-finalist in the history of the Africa Cup of Nations. Or Didier Drogba’s last chance to, you know, do something that doesn’t involve tragic penalty misses and their attendant Drogba Fails Again newspaper articles, and how his team blew that chance in typically disappointing fashion, losing 2-1 to Nigeria.

The Africa Cup of Nations isn’t the world’s most thrilling spectacle. In terms of pure sporting excitement, it’s about as good as a mediocre World Cup (which is to say most World Cups). And the empty stadiums are depressing on many levels. But the players obviously care; that’s why so many of the Premier League’s African stars (not all of them, however – I’m looking at you, Peter Odemwingie) abandon their club teams during one of the season’s most important stretches. In an era in which Steven Gerrard suffers mysterious “injuries” on the eve of every England game, there’s a lot to be said for tournaments that actually mean something.