Wigan Athletic: The Coolest Team Around 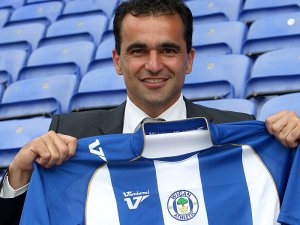 Harry Houdini and Steve McQueen combined. The Premier League has never been kind to so-called little guys, but, then again, Wigan Athletic – the team from rugby-ville that plays in a half-empty stadium – has never been especially kind to the Premier League. These days, Wigan is irresistibly surreal, a mix of old-fashioned virtues and modern flare, like a 1930s Ford masquerading as Barcelona on wheels.

Wigan is fundamentally unattractive. It’s not that it’s an ugly part of the world, though it is, nor that it’s never boasted an established football team, though it hasn’t, but that a kind of glorified boredom hangs over the place. In Wigan, you suspect, it always rains, even during the Olympics. Current West Ham midfielder Mohamed Diame says the town is “crappy” and the girls aren’t great either. Wigan has always been associated with the classic meat pie, a footballing delicacy that has little to do with actual meat but is nevertheless the food item every proper fan eats at half time. The place is a shithole – only you can’t help but feel affection for it.

Football historians argue that art, culture and politics influence playing styles and tactics. Johann Cruyff’s total football is reflected in Dutch architecture, Brazil’s individual flare is merely samba music translated to sport, and so on. You can see where I’m going with this. Wigan is typically described as industrial, honest, and hard-working. In 1937, George Orwell published The Road to Wigan Pier, which describes a generally dingy, pervasively rotten working-class town. Obviously, things have improved substantially since the 1930s, but what most people know about Wigan they know from Orwell. Over the years, men like portly former Manchester United defender Steve Bruce – whose managerial career has, happily, fizzled over the last couple of months – have perpetuated the stereotype, coaching Wigan Athletic into a football-playing reflection of the town’s 20th-century identity.

Every season, pundits list Wigan as one of the three or four teams most likely to be relegated. And every season, Wigan finishes outside the relegation places. After five or six years of consistent survival, you’d think the public would start taking the team seriously, but most observers simply can’t look beyond the meat pies and the allegedly ugly women.

In 2007 and 2010, Wigan started the final day of the season in the relegation zone. The team rarely garners more than the 40 points required for survival, and, at a certain point in the season, usually in mid-winter, even that meager total appears out of reach. Yet Wigan always pulls through, a phenomenon most fans – by whom I mean the mindless masses of message-board hounds who write unintelligible comments below online articles and beg for retweets on Twitter – attribute to intangibles like grit, determination and resolve.

But there’s more to Wigan’s success than happy coincidence and time-honored platitudes. Led by experienced chairman and world-famous blabbermouth Dave Whelan, the club makes the most of its limited transfer budget, signing promising but inexperienced players like Wilson Palacios, Antonio Valencia and Victor Moses at low prices, then selling them to bigger clubs for a profit. This model has served Wigan well throughout its Premier League history, and there’s no reason to think it won’t continue to work in the future. Wigan’s Scottish midfielder James McCarthy has reportedly attracted interest from a host of elite-level clubs. For most small teams, losing a player of his undoubted ability would represent a huge blow. But Wigan, you sense, will just get on with it, perhaps over a plate of mushy peas.

About two years ago, Wigan began to consciously distance itself from the robust, unattractive tactics with which it had successfully bombarded five years’ worth of Premier League defenses. Instead, it embraced the intricate passing that Spain and Barcelona have spent the last few seasons popularizing. The sharply dressed Roberto Martinez, a former Wigan player, arrived as the new manager. Martinez signed silky midfielder Jordi Gomez, one of many Spanish playmakers who rather fancy themselves as the Andres Iniestas of northwest England (or west Istanbul, or wherever), and started lecturing his team about triangles and possession.

Last season, Martinez did something even more drastic. With Wigan in relegation trouble (again), he changed the defense from a back four – the English standard for over a century – to a back three – the sexy European formation that Walter Matzarri’s exotic Napoli team plays every week. England is a country in which tactical inertia is just as ingrained as penalty-shootout defeats, where men like Harry Redknapp (“just fucking run about”) land big-time managerial jobs and high-profile Nintendo Wii commercials. On Match of the Day, the legendary late-night highlights program, Alan Hansen and Alan Shearer bloviate inarticulately about the importance of a good old-fashioned 4-4-2, or the multifarious dangers of gloves, pink footwear and imaginary yellow cards. A small, enlightened minority praised Martinez’s maneuver. But most English fans greeted the tactical reshuffle with barely concealed suspicion, then with total contempt.

Most of the time, the Premier League and its hardcore fans ignore tactical nuances, but when Wigan pulled a back three, well, that was just too funny. It’s one thing for Roberto Mancini and his dazzling Manchester City squad to fool around with wing-backs (City fielded a back three against Liverpool on Sunday); it’s quite another for a club steeped in pie, mud and English weather to so much as contemplate a 3-4-2-1.

But that’s the beauty of Wigan Athletic, and that’s why, if you’re looking for a Premier League team to support, you should at least give Wigan a chance. The Latics are simultaneously a beer-drenched study in overweight fans and dreary northern life and the most tactically innovative member of the least tactically innovative league in Europe. Modern football is a maelstrom of obnoxious stars, unashamed corruption and questionable financial practices. Amid these depressing realities, Wigan is a bizarrely interesting distraction.

3 thoughts on “Wigan Athletic: The Coolest Team Around”