The 1970 World Cup was almost a religious experience. The tournament has gone down in football 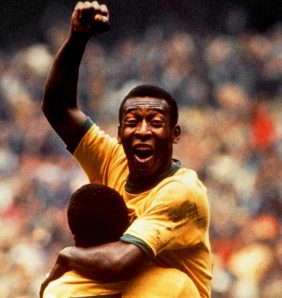 history as the greatest, most exhilarating exhibition of attacking play ever, and anyone who dares to say otherwise, or so the argument goes, is either “too young to remember” or “too fickle to be taken seriously.” This was the stage on which Brazil’s legendary striker Pele redefined the game, playing football with more exuberance and creativity than anyone before or since. It was the moment when the cult of the Brazilian – football’s worship of anyone with decent ball skills and a life story that starts with kicking soda cans in a favela – took root.

When non-football fans think about football, they generally think about Brazil. That has a lot to do with Pele, arguably the best player of all-time, and – largely because he devoted the last three or four years of his career to self-promotion – a recognizable star. People still love him even though, in the years since 1977, when his playing career formally ended with his second retirement, he’s demonstrated just how banal a retired athlete with guaranteed lifetime fame and a cushy administrative position can be. His post-career achievements include winning FIFA’s Player of the Century gong amid controversy – it took official intervention to stop Diego Maradona from walking away with the title – and deflecting criminal charges after his company robbed UNICEF. Still, clips of his greatest goals are a must for any TV montage worth its salt, and the image of a shirtless Pele lifting the World Cup is one of football’s most iconic.

For most fans, Brazil is the still the Brazil of Pele, the personification of “Jogo Bonito.” Silly as they are, the Nike commercials in which smiling Brazilians play keepy-uppy with dance music blaring in the background accurately encapsulate the public understanding of Brazilian football: Beach. Party. Samba. World Cup. It all looks like a lot of fun

But for plenty of Brazilian footballers over the last decade, it hasn’t been. Ronaldinho, once the best player in the world (and, more importantly, a long-time FIFA Soccer cover boy), recently washed up at Atletico Mineiro, his attempted international comeback in tatters. Former Internazionale striker Adriano was widely considered the “next Ronaldo,” until drugs, alcohol and mental illness caught up with him. And, of course, just a few years after he single-handedly won Brazil the World Cup, the original Ronaldo was christened “fat Ronaldo,” supposedly to distinguish him from the slimmer, better-looking Cristiano. It’s always sad when once-great players self-destruct, but watching Ronaldo and Ronaldinho show up drunk at training or, fail pre-season weigh-ins was particularly painful. Unlike George Best or Paul Gascoigne, these players hailed from the home of “the beautiful game.” The death of their careers felt almost like the death of football.

Those declines, however, took place largely off the field; it would take comparable on-field disasters to provoke public concern. Coached by Dunga and missing a few stars, Brazil started the 2010 World Cup in an uncharacteristically defensive formation that featured former Fiorentina star Felipe Melo, a Brazilian footballer renowned for his robust, and therefore “un-Brazilian,” style of play. (If you think that’s confusing, then you clearly haven’t met Gilberto Silva. He can pass AND tackle, making him simultaneously Brazilian and un-Brazilian.) Dunga, a former un-Brazilian holding midfielder himself, accepted the national team job in 2007 and immediately banned fans and journalists from training sessions. Under his stewardship, Brazil, a country known for its commitment to the notion that a win isn’t a win unless it’s stylish, abandoned the flamboyancy of 1970 in favor of tough, structured play. In South Africa, Dunga’s approach lasted until the quarterfinals, at which point, crippled by Melo’s inevitable red card, Brazil lost to Holland, another team that had compromised a fine footballing tradition in the name of winning.

The 2010 fiasco worried a lot of Brazilians. The entire World Cup campaign violated the country’s footballing values, thereby disrespecting Pele’s legacy. 1970 and all that. It was an outrage, an abomination. To make matters worse, Brazil was just four years away from hosting the 2014 World Cup. Somehow, a new coach would have to assemble a decent squad and CFB officials would have to fool FIFA into thinking the construction work was on schedule, and, even then, Xavi and Iniesta would still have possession. Of course, stadiums are always ready in time for kickoff, no country produces talented players more regularly than Brazil, and Xavi probably won’t make it to World Cup 2014, but, at the time, it felt overwhelming. And then Neymar happened.

Brazil’s latest wunderkind actually emerged months before the 2010 World Cup began. Indeed, Brazilian fans campaigned for Dunga to include him in the squad – although, knowing what we know now, that was never likely to happen. Neymar is the quintessential football star. He sports a rather odd-looking Mohawk, became a father at age 19, and, in 2011, was labeled the “best player in the world” by none other than Pele, a man who has never let trifling things like modesty and common sense get in the way of his career as a bloviating ex-legend. Supposedly, Neymar’s emergence has added gloss to the Brazilian domestic league, which, despite the national team’s success, has never been ranked alongside the premier European divisions, though it now attracts big-name players like Clarence Seedorf and Florent Malouda. Of course, any rational observer can see that the influx of foreign stars has less to do with some punk-looking teen phenomenon than it does with Brazil’s blossoming economy, but some Brazilians would probably argue that Neymar is responsible for that, too.

Inevitably, Neymar has struggled to live up to his reputation as a mohawked Christ figure. Ignore the hype, and his international career seems stupendously ordinary: he flopped at the 2011 Copa America and, last week, failed to claim gold at the London Olympics. In 2011, he led his Brazilian club, Santos, to Copa Libertadores (South American Champions League) glory, but he has struggled to get the better of more accomplished opponents. And, of course, he’s never played club football outside his home country. Then again, it’s difficult to ignore the hype

Brazil really, really wants Neymar to become the best player in the world, and if achieving that dream necessitates a bit of self-deception, then so be it. Anyway, Pele says he’s better than Messi, and if there’s one country that hasn’t tired of listening to Pele, it’s Brazil.

Brazil has been waiting for a guy like Neymar ever since Ronaldinho partied away the last of his immense talent, and you get the feeling that if it all goes pear-shaped in two years, things will get very messy indeed. But once the anger subsides, Brazilians will remember that they still have Mexico 1970, and that nobody, not even Spain (my pick for 2014), can take those glorious three weeks away. And by the time Pele’s beaming face reappears on the nation’s television screens, as he juggles yet another promotional football or shakes hands with the president of some country Brazil wants to butter up, everything will be, if not forgiven, then perhaps forgotten, at least temporarily.