On the face of it, Manchester City’s thrilling title success looks like Nasri’s plan come to fruition. Despite the claims of 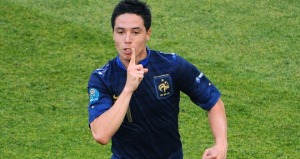 Gunners fans, he left Arsenal not for money, but for a shot at the trophies that have eluded Arsene Wenger for eight years. To Nasri, Manchester City, with their Arab riches, represented an enticing chance for sustained, silver-lined success.

Nasri had enjoyed a productive spell at Arsenal. He missed out on major honors, but his goals – especially a brace against Fulham – solidified his reputation as one of Europe’s most dangerous creative midfielders. Come summer 2011, he was a hot property. First Manchester United and then Chelsea chased his signature. Eastlands, though, was always his preferred destination: “That’s all I wanted since the start,” he said after sealing the move. “I’m happy to be there in this dressing room.”

Perhaps some of the success went to his head. In his first interview with Manchester City’s official television channel, Nasri claimed that Arsenal fans are “not that passionate”. The remarks quickly backfired.

With City’s other playmaker, David Silva, leading the league in assists, Nasri found playing time hard to come by — it took him until October to score his first goal. And on those rare occasions when Nasri did play, Mancini fielded him more centrally than Wenger had the season before, negating some of the attacking qualities he had developed in a modified wing position.

Nasri’s form picked up during the last third of the season — his winning goal against Chelsea proved crucial in the final reckoning — but he was never first choice. After a brief slump, Silva picked up form during the season’s closing weeks, denying Nasri the consistent minutes that he had benefitted from during his successful stint in North London.

Meanwhile, Nasri continued his war of words with Arsenal fans, matching Piers Morgan’s critiques with a few pointed remarks of his own. He then marked City’s league success by sarcastically telling Gunners supporters to “celebrate their third-place achievement.”

Nasri has succeeded in making himself unpopular, and not just with Arsenal fans. When reports earlier this month claimed that City manager Roberto Mancini is considering selling him, few onlookers felt any sympathy. The underperforming Nasri, currently representing France in Ukraine and Poland, looks to be playing for his Manchester City future.

France’s opener against England presented Nasri with an opportunity to silence the doubters. He looked sharp in a 1-1 draw, scoring France’s equalizer after Joleon Lescott had given England a surprise first-half lead. Nasri followed with a solid if unspectacular performance in France’s 2-0 victory over tournament hosts Ukraine.

This year’s Championships are meant to be about more than personal redemption, though. Nasri was left off the France team that crashed so spectacularly in South Africa, but nevertheless he understands the importance of this year’s tournament. “You know, in France the image of the national team is really bad, so we’ve tried for two years to work on that,” Nasri said ahead of France’s final group match, a disappointing loss to Sweden. “We’re trying to show everybody something different, that we’re not just like players with huge egos and big heads. I don’t think the fans have forgiven us, but we will do everything to be forgiven.”

That message was undermined by a  dressing room row in the aftermath of the Sweden defeat. Supposedly, members of the French squad accused Nasri of playing for his own personal glory rather than for the good of the team. In Wednesday’s press conference, Florent Malouda did his best to suppress those rumors, stressing the importance of collective effort.

On Saturday, France face reigning world champions Spain, a difficult match-up that Nasri and company could have avoided had they performed less feebly in their final group game. But it’s important that France see this game as an opportunity, not a punishment. This quarterfinal showdown represents a genuine chance to erase the memories of that disastrous World Cup campaign and restore dignity to a jaded group of players.

Since taking over the French national team in July 2010, Laurent Blanc has worked hard to maneuver through the post-South Africa fall-out. For his first game in charge, a 2-1 loss to Norway, Blanc excluded all members of the 2010 World Cup squad, not just the four – Nicolas Anelka, Patrice Evra, Yoann Gourcuff and Franck Ribery – who were officially suspended because of their roles in the player mutiny. It was an important symbolic gesture. Yohan Cabaye, Karim Benzema and Samir Nasri all took part in that game, just as they did against England two weeks ago.

France play in an efficient 4-2-3-1 formation, with a holder (either Alou Diarra or Yann M’Villa) positioned next to Cabaye, whose range of passing makes him an effective link between defense and attack. Question marks still remain over the defense, though. Center backs Phillipe Mexes (who is suspended from the Spain game after picking up one yellow card too many) and Adil Rami, both coming off mediocre club seasons, have yet to convince.

Samir Nasri is an integral part of what should be a dangerous French attack. But all isn’t as it should be. According to French newspaper L’Equipe, Nasri has fallen out with star-striker Karim Benzema, who, frustrated by Nasri’s play, has taken to dropping deep into midfield.

The demons of South Africa are making an inopportune reappearance. Nasri is at the center of France’s latest bout of infighting.

Roberto Mancini will watch with interest.