Woody Allen famously said that “90% of life is just showing up,” but at least one board of FA officials disagrees. 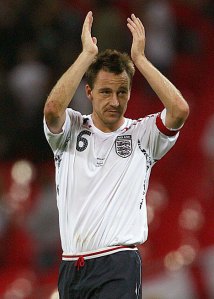 John Terry is cast by journalists as an embodiment of all that is wrong with professional football players. Rejecting common decency, parking in disabled spots and sleeping with a team mate’s ex-wife will do that to you. Even Terry’s initials — now a byword for the McClaren era complacency that permeated England’s failed Euro 2008 campaign — has negative connotations.

John Terry has let down Chelsea Football Club on both personal and footballing levels. He missed the penalty that would have won Chelsea the Champions League, and he has consistently failed in his ambassadorial responsibilities. It was he who heckled Americans in an airport days after 9/11, he who slipped to let Robin Van Persie score in October. Yet, despite innumerable managerial changes, Terry remains at the heart of the club’s plans. Captain, Leader, Legend.

Apart from several isolated moments of insanity, Terry’s footballing strengths haven’t diminished. He lacks pace, but his ability to block shots and make vital tackles more than compensates for that shortcoming. It is telling that the young, vibrant Andre Villas-Boas has stuck with Terry. Villas-Boas was hired to carry out a reconstruction job, to eliminate pensioners in a ruthless nursing home purge. Instead, Chelsea under AVB have needed the stability of the old guard more than ever. David Luiz has struggled to contradict Gary Neville’s pointed critiques, and new signing Gary Cahill will need time to recover from a chastening five months at Bolton Wanderers. Terry is still Chelsea’s most reliable centre back.

In between court appearances, public apologies and super-injunctions, Terry has done what others refuse to do: play football. He never excuses himself from England duty, never pulls up with a minor injury days before a friendly. He always shows up.

Terry lives up to the cliches that the media mock him for. He is a man-monster, a soldier, a hero. He wore the armband with pride during his initial captaincy, and then obediently fell into line as it was passed from player to player following his very public dressing down. When Capello reinstated Terry as England captain, the defender accepted the honor with dignity, silently absorbing his coach’s praise.

“He was my first choice when I decided on the permanent captain,” Capello said. “John also, when he played without the armband, was everytime a leader on the pitch, a leader in the dressing room.”

In the idiosyncratic English that defined his tenure, Capello put his finger on the explanation for Terry’s return to the captaincy: quite simply, he was the best man for the job. Amid a slew of other, less publicly scrutinized candidates, Terry won back the armband because he was the most determined and committed of the lot — the one who was always there.

Capello publicly supported Terry, which is why, after FA administrators humiliated his skipper, he resigned on Wednesday. Now that England are manager-less, Terry’s future with the squad is uncertain.

Acquitted of tax evasion just hours before Capello’s resignation, Harry Redknapp has emerged as favorite for the vacant position. He will inherit a confused and discontented squad.  Redknapp will have to make key decisions about players ranging from the inconsistent Theo Walcott to Redknapp’s own nephew, Frank Lampard. In the background lurks the unavoidable Wayne Rooney question: how do you get the best out of an incorrigible genius? And that’s not even to mention Terry’s alleged racial abuse of Anton Ferdinand, the younger brother of probable England defender Rio. Welcome to the most prestigious job in football, Harry.

Redknapp will have to strike a balance between Capello’s severity and McLaren’s friendliness. He will have to treat players warmly enough to earn their attention without compromising the distance that should exist between players and their manager. Traditionally, it is the captain who bridges that gap. Redknapp will have to decide quickly who deserves that responsibility.

Whether it be Gerrard, Lampard or even Hart, the next skipper must take note of Terry’s struggles and realize that, for better or worse, being England captain is about politeness as much as leadership.