INFTH Book Review: All Or Nothing 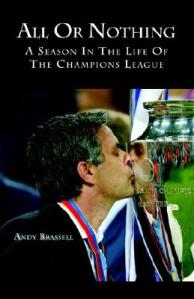 ambitions of clubs across the continent; all of them dreaming of the same ungainly, two-handled trophy. All or Nothing is the story of that tournament. The story of the teams, fans and players that make-up modern football’s most defining edifice.

Andy Brassell sets out to understand the Champions League’s transcendent influence on European club football, to examine how the tournament affects competitors big, small and in between. Unfortunately, Brassell’s account of one “season in the life of the Champions League” fails to compel. It’s not fresh, it’s not new and it’s not exciting. Moreover, only eight years after publication, it’s hopelessly out of date.

Brassell’s story is set in season 03/04. Chelsea are beginning to emerge on the European scene, Arsenal are the best club side in England and Italy has yet to be hit by Calciopoli. A young man called Jose Mourinho is managing some club in northern Portugal. The Champions League has begun to evolve into the commercialized behemoth that it is now and Brassell wants to know why. Why one tournament has facilitated financial meltdowns, tarnished the reputations of giants and provided Europe’s footballing have- nots with a springboard to a better future.

Brassell’s formula is simple enough: visit Europe’s prime footballing locations, watch a game or two and discuss the importance of European competition there. The result, alas, is quite dull. Some chapters consist largely of  rushed, rehashed official histories; others offer repetitive summaries of long-forgotten, eminently forgettable events. Sure, Brassell comes up with some amusing anecdotes – beer on tap in Bayern Munich’s press box, for instance – but these occasional sparks fail to make All or Nothing anything  more than a poorly written, overwhelmingly generic product.

The book’s thesis just isn’t that interesting. The clubs discussed are supposed to have their own unique European personalities, every team contributing to an immense sporting mosaic. Instead, each slips into a broad and, by now, clichéd category: the financially overstretched competitors (Deportivo and Leeds), the sleeping giants (Juve and Bayern) and the clubs so intrinsically linked to the “cup with big ears” that their every minor slip-up is probed and questioned (Real Madrid…). Originality is in short supply.

Format doesn’t help either. The team-by-team break-up of individual chapters limits cross-analysis, turning a book that should be open in its examination of diverse footballing cultures into a parochial and mundane agglomeration of choppy and tentative sections. All or Nothing lacks the creativity requisite to literary success.

Brassell fails to tie together a hodgepodge of story line; he lacks the bravery to connect footballing dots. Rather than placing the Champions League in a wider sporting context, Brassell spends page after page reiterating now worthless pre-and post-match details. All or Nothing is depressingly specific, it simply doesn’t do justice to a competition deserving a first-rate analysis. If you’ll pardon a lame analogy, I see it going out with a whimper at the group stage.

Read the rest of our book reviews.

Buy All or Nothing on Amazon.