After two weeks of old arguments, the Champions League’s return proved a refreshing end to the 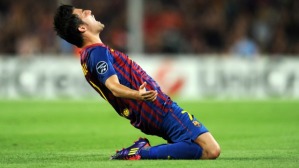 At what point England’s dour, 1-0 win over Wales was forgotten is hard to say. It could have been on ninety-three minutes at the Nou Camp, when Thiago Silva powered home a late equalizer, or maybe seconds later, as Ivan Peresic’s breathtaking volley flew into the top corner in Germany. The contrast between two midweek spectacles couldn’t have been more pronounced.

It seems that international breaks are now nothing if not depressing inevitabilities – interim periods cut from the same cloth as that mountain so elegantly described by the brilliant Dante.

For all the beauty that exists at the international level, a lurking suspicion remains that each aspect could be topped by football’s new Helen of Troy – Spain’s triangles not quite as cute as Barca’s, and England’s new generation distinctly inferior entertainment to the power struggle in Manchester.

In Europe’s biweekly fiesta of football, the World’s best come together in a celebration of talent arguably more potent than even that of the World Cup.  Here the greatest have performed in a competition that respects all regardless of nationality. A Welshman, Ryan Giggs, may never play in the World Cup but it was he on Wednesday who broke new ground in terms of consistent Champions League goal scoring.

In its strained existence, the international game is fast having to resort to a reserve supply of nostalgia. Inflated reputations have been bestowed on events whose legacy exceeds their actuality – airbrushed memories, filled with excitement and childhood innocence. In the context of modern football though, and specifically the Champions League, international play is viewed through a far more scrutinizing lens than in the past. No longer is it only once every four years that the best perform together, every two weeks on Tuesdays and Wednesdays Messi, Ronaldo and Rooney compete in football’s most televised annual event.

For the players too, priorities have changed. It is an accurate observation that English footballers tend to pick up niggling injuries only after those games positioned directly ahead of a drab qualifier in Moldova or so called “glamour friendlies” somewhere in the Middle East. If stars are falling out of love with international play, then to expect fans to arrive in their masses is simply naive. Even in drunken stupor, the most banal of football supporters are perceptive enough that lack of effort goes not unnoticed – and for many, in England at least, that clear disinterest leads to angst and eventually disillusionment.

To blame the players, though, would be unfair. In a sport more professionalized than ever before, monetary incentive has to take precedence over what was once the pinnacle. Pressures from above, from the men paying wages, must be accommodated with more willingness than the cumbersome rhetoric of righteous fans. And it’s only a matter of time until the players’ attitude takes on a pervasive effect.

Already, the patriotism stirred every time a national team kicks off is routinely diluted by a wave of impatience. Heavily publicized qualifiers between international giants never produce the same intrigue as Champions League match days – ones analyzed at a quite supreme level of detail. In the age of the internet, to drown in coverage is not to enjoy that one month out of forty-eight, but to get up in the morning, and retire to bed at night.

The glorious replicators of a competition once synonymous with magic are on the verge of surpassing their masters. In Lionel Messi, the Champions League presents its reply to Pele and Maradona, symptomatic of our age perhaps, that he has reached that pantheon without claiming a World Cup winner’s medal.

Over the next fifteen years, a decline may gravitate towards an ending. In bringing the World Cup to Qatar, Fifa have robbed the tournament of what historical relevance it once had, attempting to turn a month powered by the past into one futuristic yet hollow. A seasonal switch would only add to the farce and assist in a deterioration. A deterioration powered by the Champions League.