Death Of Arsenal Is Not What The League Needs

In accord with all the glee, mirth and column inches dedicated to the demise of Arsenal, observers forget what exactly they are thinking and saying. As Manchester City arrive into English football’s premier habitat, those who once ruled supreme are fast finding themselves flat on their faces – and not necessarily to the benefit of the league.

Gone are the days when a cleverly constructed team, put together and developed by a savvy manager, could rule the roost.

Arsenal are a side run by consummate professionals, an intellectual manager and a group of players molded in a footballing cast that, for all its faults, is admirable. The style inherent in their passing game was one which gave the Premier League something different. Arsenal was our answer to the Spanish magicians battling at the top in Spain – perfect no, but a boon to the league.

Even after their resolute win in Italy this evening though, the jury remains out on a team now shorn of arguably their two best players. While the importance of Champions League qualification cannot be downplayed, those holes – sadly – left by Nasri and Fabregas need filling. Arsenal were terrific at times, but always seemed to be missing something, that extra edge which has served them well further along in European competition. It was players like Nasri and Fabregas who catapulted the Gunners into a Champions League semi final – but more importantly, it was they who orchestrated play, gave Arsenal their creative identity.

Arsenal were always everyone’s first pick to watch on a Saturday afternoon – their stadium a fitting venue for some of the most marvelous attacking football ever played in an English ground.

For all their money, ambition and star quality, Manchester City will never replicate the Arsenal style. In many ways, City are Wenger’s antithesis – the epitome of what football has become, symbolic of changing tides in the world’s game. While Arsenal develop, City buy – stockpiling players and leeching the rest of the league, before poisoning average footballers to the rest with exorbitant wages. 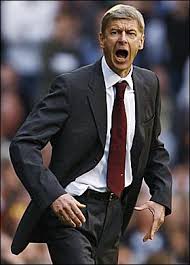 This is not what we as English football fans should want. We shouldn’t glory in the beginning of the end this season, for one of the country’s most storied clubs, but suffer with them – mourn the loss of one of the league’s great entertainers. The Premier League is a lesser place without Cesc Fabregas, and a diminished product without the Arsenal of Nasri’s era.

United will continue to attack with verve and panache, but even at their most swashbuckling they never touch the heights so often frequented by Wenger’s team. On the whole, they are a superior side – certainly a better alternative to Manchester City – but their ethos is too different from Arsenal’s, for the Old Trafford club to act as a substitute.

No side better represents England’s answer to Ajax and Barcelona, than the one set to drop into the league’s bottom three this weekend. A philosophy dedicated to ingraining footballing thoughts and ideas is one that should be savored with the same vigor as title triumphs – even more so now as the financially charged world forces such principles into extinction.

Arsenal for many a year offered the Premier League a different dimension, a breath of fresh air amidst a backdrop so fiery that often the very act of respiration was forgotten. In the end, football is designed to entertain, though sadly, those with goals focused around aesthetic values are fast being alienated by a monster of our own creation.

What is next for Arsenal?