Incorrigible Mourinho Will Continue To Polarize


Love him through gritted teeth or hate him guiltily, no one ignores Jose Mourinho. Some say that all geniuses have to have a little madness about them, well, that careful walk, and menacing, almost condescending movement of the finger bore all the hallmarks of insanity. The Portuguese international wasn’t dressed in a grey skirt and matching vest, but his actions last Wednesday were no more mature than that of a petty schoolgirl.

The moral high ground taken by those overly critical in their assessment of Mourinho’s behavior though, is one of such high altitude that the air makes for difficult respiration. The allergy I have to righteous, usually hypocritical indignation is one I’m sure shared by the reader; no one wants yet another annoying exposé – the metaphorical wrist rap is one which really should be outlawed. More interesting than the action itself is the cause, the frustration of the man, the source of Mourinho’s discontent.

Is the Special One losing his touch? Has the once untouchable coach, creator of impregnable teams finally met his match in the tiki-taka of Madrid’s Catalan nemesis? We won’t know the extent of Mourinho’s troubles until the end of the season, and even then, we might not have the opportunity to learn anything at all.

Protected from most criticism by that hefty, armor like substance we call an ego, it will be fascinating to see how the Portuguese reacts if chinks start to appear in that silver lined breast plate.

As cliched as it sounds, Mourinho doesn’t know the meaning of failure, let alone dignified one. Increasingly, the feeling is that if or when such a time comes, the former Chelsea manager’s image will be further tainted not by the defeat itself, but by the maelstrom of vitriol and denial that will engulf it. Mourinho is always the center of attention. When the public eye should have been focused on the potential of a second five plus trophy haul in three seasons for Barca, they instead cast an austere glance towards the Special One. If Guardiola once again comes up trumps in May, you can be sure that Mr. Mourinho will have yet another trick up his sleeve. 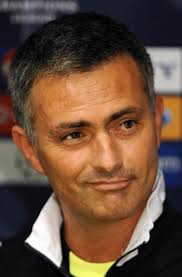 It is hazy what he is attempting to do, a risky step that shows some lack of self belief. In poking and whinging, arguing and moaning Mourinho trys to inculcate the classic “us against them” mentality into the minds of his disciples. It is ironic though, that the very tactic which Barcelona preferred above all other during the Franco years should reappear decades later on the opposite side of the divide.

But what, when perhaps, his silver encrusted wall crumbles to the ground? When the aura leaves, so often does the success. Tales have been told of teams being beaten before they walk out, trodden on before the opponents have even laced up their boots. With Mourinho in the dug out, such a fate is a likely one. It all has to do with an aura, a sense of deserved-ness, the feeling that winning is not earned, rather received – a god given right that only certain individuals benefit from. It doesn’t last forever.

Just as tennis players like Roger Federer suddenly can’t walk to titles, managers lose the ability inspire fear. At Porto, Chelsea and Inter, Mourinho above all else was feared. United fans saw him as the usurper, the antichrist, arrived suited up and handsome, ready to unseat a forlorn and elderly Ferguson. At Inter too, Machiavellian sentiments manifested themselves in his attitude, and to one side of the San Siro, his stay meant the cancellation of expected celebrations.

In Spain though, he has lost something. While his sojourn into the dressing room via laundry bin, an action perhaps more worthy of scorn than a poke towards the eye, prompted mirth, now his illicit undertakings warrant the sharpening of journalistic knives. In England and Italy, Mourinho earned the right to flaunt the law, and he could combat the scant criticism that came his way with a torrent of trophies. Thanks partly to Barca, partly to Sergio Ramos, he has no silver defense to speak of anymore. Whether or not he gets one back, we’ll just have to wait and see.