John O’Shea: I Miss You Already 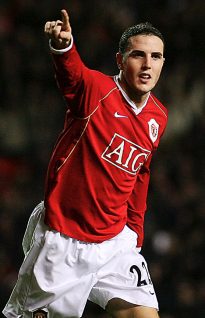 When asked by a popular forum, which player I would most like to fill all eleven places in a hypothetical dream team, the answer was simple: John O’Shea. The man is a genius, though not in the mold of Ronaldo or Messi, rather in a more homey, comforting way. His versatility is unique in its broadness, his touch underrated and his work ethic admirable. He used to play for my favorite football club.

When John O’Shea signed for Sunderland in July, I shed many tears. The Irishman holds a rightful place in the pantheon of great Manchester United moments – his last minute winner at Anfield prominent, as well as that gorgeous chip at Highbury. More emblematic though, of the John O’Shea who most fans know is a five minute cameo at White Hart Lane, when O’Shea finally completed the collection; left back, right back, center half, and then, at last, a place between the sticks.

Not many remember what happened after that, but I do. I remember him, denying Robbie Keane with his legs, and then, in the post match interview, claiming the clean sheet for his own. Even the fact that we were 4-0 up at the time doesn’t detract from my memory, though in all honesty, nothing could. That night at the Lane epitomized John O’Shea, the John O’Shea that Manchester United are in need of after Sunday’s injury fiasco.

Mind you, we’ve been through this before. Michael Carrick and Patrice Evra playing center half in 2009, Rio Ferdinand an ever present at left Twitter in the stands, and Tomasz Kuszczack, doing his level best to kill off those of us with weak, calorie bloated hearts.

Even during those most unfortunate times though, we always had good old John O’Shea. O’Shea, who played in central midfield against Arsenal last season, O’Shea who looks set to languish in the Stadium of Light’s perpetual squalor for the remainder of his career.

While the retirements of Neville, Scholes and Van Der Sar dominated the summer’s footballing obituaries, it was O’Shea’s decision to leave which will cost us the most; the departure of a man who has at one point or another filled in for all three of those legendary ex players.

Now, at our time of need, with three of the starting back four out injured, there is no great big, almost huggable Irishman to bail us out. No bastion of versatility so able and willing as John Francis O’Shea. Unlike other defenders, his positional listing on Wikipedia bares no specific information. After “position” reads “defender.” Really though, it should simply say “player.”

Life without O’Shea is a strange and vexing proposition. It is one that has lurked, slyly in the darkest depths of my sleep, attempting to penetrate my sheep ridden mathematics with dastardly nightmares. Here though, in the rough and tumble world of Premiership football, there is no alarm clock to end the terror. The legend that is John O’Shea has departed Old Trafford for good, and only now are United starting to suffer from the terrible consequences.

While watching David De Gea’s sloth like dive and Shane Long’s trickling shot, that memory of White Hart Lane returned to me. It would be hyperbole to imply that John O’Shea might make a more fitting replacement for Van Der Sar than Atletico Madrid’s Europa League winning number one, but it would be a lie to claim that no such switch crossed my mind.

The clouds prowling above The Hawthornes on Sunday evening seemed darker than normal. A win had been well and truly tainted, what should have been joyous post match celebrations tempered. Despite the presence of fairly adequate replacement on the bench, O’Shea’s shadow darkened my mood.

There was one ray of light though, for another Irishman happened to be on form for United against the Baggies. O’Shea remains a legend, but he may well eventually be usurped by international forward and goalscoring legend, O’Gee.