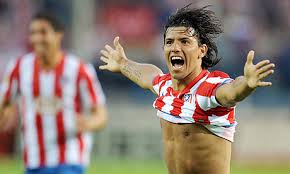 The English rarely get on well with Argentinians. There was the Falklands War, the hand of God, Tevez’s betrayal, Simeone’s acting, the list goes on. However, while one Argentine dominates a sport with very English origins, the creators themselves are left seeking a sprinkle of stardust, seeking it from an Argentine.

It wasn’t so long ago that the Premier League was considered the finest league in the World. Default, no question, argument over. It boasted the best players (Ronaldo, Torres, Drogba), its teams dominated Europe and the English national side was enjoying a golden generation. The best coach in the World was making his name in the league, and the best coach of all time was continuing to succeed in it. All was well.

The seeds of unrest though, were sown on a rainy night at the New Wembley. Walking, sheepishly, down the sidelines, was the English national team manager, he had an umbrella in his hand. After all, it was raining. At one point, it looked as though Steve McClaren would be fine, as a cross from the ageless Beckham was converted by six foot seven striker Peter Crouch. Moments later though, the man under the umbrella wilted. Mladen Petric of Hamburg, had made it 3-2 to Croatia. Twenty minutes on and it was over, England’s dream of reaching the European Championships had ended, and with it, a period of dominance. No longer was English football the cream of Europe, the Premier League’s lofty status was disappearing just as quickly as hopeful premonitions of glory in Switzerland.
Later that same year, an English team would go on to win the Champions League, beating another English team, ironically enough, on penalties. Manchester United were the champions of Europe, Chelsea were the runners up, both were English sides, so in essence, England were still champions of European football. But were they? That very summer heralded the rise of a new footballing dynasty as, in the absence of England, Spain lit up Europe for a month, cruising to glory in Austria and Switzerland. Less than a year later, virtually the same team of players would be at it again, this time in the club setting. And most importantly, this time against an English team.

Barcelona’s 2-0 win over Manchester United was important in two respects. First of all, it represented the gulf which had emerged between the best in Spain and the best of the rest, and secondly, it was Cristiano Ronaldo’s final game for Manchester United. As Barca left United to wallow in their misery, so did Ronaldo, off to the new footballing Mecca, off to Spain.
At the time it was only hinted at, but over the next months hints would turn into questions, and then questions into answers. Suddenly, no one saw England’s top division as a quality platform anymore, no one was interested in the passion, the verve and the excitement of Premier League football. Yes, technique, artistry and invention were the new European fads, spreading just as quickly as fashionable clothing styles across a middle school playground.
Next to leave was Xabi Alonso, fed up with life in Liverpool he moved to Madrid. Then Karim Benzema chose to reject Manchester United, he wanted to go to Spain too. Fabregas wished to leave as well, but Arsenal wouldn’t let him. Fast forward a year, and Mascherano had left, reportedly, Rooney wanted to follow him. The message had been successfully conveyed; England was no longer the center of the footballing universe. The Premier League’s time had ended. It had been a little more than just Andy Warhol’s “fifteen minutes of fame,” but nevertheless, it would be a fallacy to claim that the league’s time atop the footballing mountain was anything more than a stint.
Entering this latest edition of the Premier League, England is still behind. Spain is the premier destination, Barca the world’s best club side, and the Spanish national team now, indisputably top of the pile. But there is hope yet. The money infused into Manchester City in September 2008 continues to mature, as does the ambition of its owners. City want more than ever to be the team that breaks Spain’s dominance, and financed by an army of Arabs, they have the funds to do it.
In the cut throat world of transfer market dealings, or simply mercato, as it is called in Italian, any scrap, any lead is of the utmost value. Well, City seem to have found their scrap, one willing to forfeit the sun of Madrid for the rain of Manchester. His name is Sergio Aguero. He is Argentine, and he recently outperformed Messi at an international tournament (though then again, so did everyone else who bothered to show up). He was part of an Atletico Madrid side which triumphed over English opposition in the Europa League two years ago. He sleeps with Maradona’s daughter.
With his silky skills and jet black hair, Sergio “Kun” Aguero could yet be the savior of English football. He has an aura of excitement about him, a sort of swagger, similar to that of Ronaldo, and there is no doubt that he is one of the World’s most sought after talents. However, he was willing to move to England. He was willing to move to a foreign country, speaking a foreign language, and try his luck. In short, he was willing to do what so many stars have been unwilling to do over the past few years. He was willing to join the Premier League.
Whether or not Sergio Aguero rises to prominence in the way that he is expected to, only time will tell. He has big boots to fill in Carlos Tevez, and even greater expectations; ones which are direct products of the favorable reputation he garnered while playing in Spain. Aguero will be expected by the English press, to not only produce the odd, sporadic moment of genius, but also to grind it with the minnows, to perform just as well at home to United, as he does away to Bolton, on a cold, rainy Tuesday. It was with the latter requirement that Robinho failed so miserably, and for the sake of the Premier League, fans must hope that Aguero’s path is more successful than that of his fellow South American. Aguero needed to move to competitive a club, but unwittingly, he has fulfilled a much greater need. Perhaps even more than Aguero needs City, the Premier League needs him.