U21 Euros: Team Of The Tournament

Over the course of a fantastic couple of weeks in Denmark, we have had the pleasure of watching some of Europe’s finest young stars grace the international stage; here is the best eleven.

Goalkeeper: David De Gea-  It’s no secret that David De Gea will be signing for Manchester United in the next couple of weeks, and it is also no secret that he is a fitting successor to Edwin Van Der Sar. The goalkeeper put in a very solid shift for the Spanish U21s, despite spending large periods of the game under no pressure, he was able to come up big when it mattered most. A penalty save against Ukraine was probably the highlight of his tournament, there is no doubt that he played a massive role in Spain’s success.

Left Back: Didac Vila- For a long time, the weakest position at both of Spain’s top two clubs has been left back, but the play of Didac Vila has offered hope that the national team will avoid a similar fate. Fantastic going forward, Vila has a brilliant cross in his locker, as demonstrated when his whipped delivery was met by Herrera for the opening goal against Switzerland. In defense, Vila was not overly taxed by Spain’s opponents, but when called upon he stood up to the task, and shone out especially in comparison with the shoddy center back pairing that proved to be Spain’s Achilles heel.

Center Back: Phil Jones- Another man who will be plying his trade at Old Trafford next season, Phil Jones was one of the few players to impress as part of what was a woeful England side. Alongside fellow United man Chris Smalling, Jones looked solid in defense, and composed when bringing the ball forward, both attributes of the typical modern center back. Jones has been compared to John Terry by certain members of the British media, and there is no doubt that he shares Terry’s remarkable leadership skills, Jones led by example in every game, even when he wasn’t wearing the captain’s armband.

Center Back: Timm Klose- For me, this position was a tossup between Swiss defenders Klose and Rossini. Both were absolutely terrific throughout the tournament, keeping four straight clean sheets before a Herrerra header finally breached their fortress. The pair looked impressive in the air and calm on the ball, players capable of starting attacks, but also of breaking them up. The Klose-Rossini axis is one that we will hear plenty from in the future, Switzerland are famous for their watertight defenses, and players like Klose will help to maintain that reputation in years to come.

Right Back: Martin Montoya- Much like left back Vila, Montoya is a typically attack minded full back, capable of delivering a dangerous cross, but also of shutting down an opposition winger. Posed with the considerable threat of Innocent Emeghara, Montoya kept his focus against the Swiss, and turned in an impressive defensive shift. The next Sergio Ramos perhaps…

Left Midfield: Innocent Emeghara- Emeghara was a player I mentioned a couple times throughout my analysis of the tournament, and he is a player who may well have earned himself a lucrative summer move. A very tricky dribbler, Emeghara scored a solitary goal at the finals, but nevertheless caused enough of an impact to warrant inclusion on this list.


Defensive Midfield: Javi Martinez- Already a World Cup winner, Javi Martinez was one of the most experienced players in the Spanish squad, and his big game savvy showed on countless occasions throughout the tournament. Martinez has the ability to dictate the tempo of matches through his decisive passing and dribbling, and the Athletic Bilbao player can also mix it in the tackle too. His superb defensive job on Xherdan Shaqiri helped to prevent Switzerland from gaining any kind of attacking momentum, I could see Martinez doing similarly effective man marking jobs for the senior team in the future.

Attacking Midfield: Ander Herrera- Without a doubt my player of the tournament, Herrera looks every bit a player of the caliber of Iniesta and Xavi. His controversial goal set the ball rolling for Spain, and fittingly, his headed effort proved to be the winner in the final. Herrera boasts a delightful range of passing, to go with a real eye for goal, and ability to spot space and then move into it. Next season, Herrera will join up with the aforementioned Javi Martinez at Athletic Bilbao, I expect nothing but excellence from that duo in the 2012 edition of La Liga.

Right Midfield: Juan Mata- A left footed creative player, Juan Mata is versatile enough to play on either wing or through the middle. At times during the tournament, it felt simply unfair that a player his ability was allowed to participate in a youth competition, against Ukraine he was particularly deadly. The outright top assist maker, Mata’s inclusion on this list is a given, he is a player of exceptional talent who did not disappoint when on show in Denmark. Rumors are circling around that he could be headed for Liverpool, and personally, I think the Reds would struggle to find a better signing than Juan Mata. 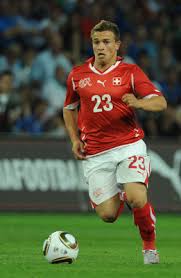 Withdrawn Forward: Xherdan Shaqiri- Quite simply, this lad is irresistible, a joy to watch, but a menace to defend against. His quick turns and bursts of pace are reminiscent of Messi, as is his shooting, which is just deadly from almost any range. Though he scored just the one goal, Shaqiri’s overall contribution to the Swiss attack cannot be lauded enough, he was the man that everything went through, their star player and most influential playmaker. Reportedly available for only seven million pounds, Shaqiri would be an ideal acquisition for a whole host of European clubs, expect to see him playing at a high level team next season.


Center Forward: Luis Adrian- The golden boot winner, Adrian just had to be added to this list, he was clinical in front of goal, a pestilence to every defense he played against. After scoring twice in Spain’s second group game, Adrian exploded all over this tournament, netting again against Ukraine, before scoring two vital goals against Belaruse in the semis. In the final, Adrian was kept largely quiet by an impressive Swiss center back paring, but he should be forgiven for that, after all, without his late equalize in the semi there wouldn’t have been a final for him to under perform in.