A World XI To Take On Barcelona

On Wednesday, Goal.com’s Paul Macdonald will unveil a World XI most equipped to take on Barcelona. Today, In For The Hat Trick will introduce their XI, on Wednesday we’ll see how it compares with Paul’s!


The Rules: The team must be made up of current players, that do not currently play for Barcelona.


Formation: My World XI would play in a 4-3-3 formation, one that when supplied with the appropriate personnel is dangerous in attack and compact in defense. 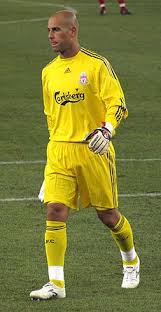 GK: Pepe Reina- Many would say that this is the least important of the eleven positions to be filled, but I disagree, while there are a whole plethora of adequately equipped shot stoppers in the game, there are very few who would fit my requirements for inclusion in this team. What Pepe Reina brings to the table that is perhaps lacking in the game of other goalkeepers is real intelligence with the ball. When Reina picks up the ball either with his feet or his hands, he is immediately looking for an option, a way to start an attack. Boasting remarkably good technique in both his throwing and his kicking, Reina is capable of picking out the players he sees, and would be an ideal man to kick start a surge forward.

RB: Branislav Ivanovic- Right back was one of the most difficult decisions to make my mind up on; there are a myriad of potential candidates, from youngsters like Rafael to the more experienced Maicon. However, Ivanovic’s sheer strength, speed and concentration sets him apart from the rest. Sure, Maicon was a part of the Inter Milan team which beat Barcelona in a two legged Champions League tie, but since then, his reputation has been tarnished by Welsh Wizard Gareth Bale. Ivanovic however, has been a model of consistency, the only Chelsea player last season to perform strongly throughout the duration of the league campaign. Ivanovic would be more than capable of stopping players like Pedro, and his prowess in the air would aid the World XI on set pieces.

CB: Lucio- Despite not playing his best over the past twelve months, Lucio still is an obvious candidate for the center back position. His stellar partnership with Samuel factored hugely into Inter’s success at the Camp Nou, and I feel that Lucio is still good enough to pull that feat off again. His strength, size and power are simply breathtaking, and I feel that he could easily shut down striker David Villa. Lucio has the pedigree, and he is most certainly a default starter in this World XI.

CB: Thiago Silva- This young man is fast becoming the best center back in European football and his play last season with AC Milan more than warranted a spot on the World XI team sheet. Silva is a disciplined defender who can also play in midfield, showing that he has the skill and passing ability necessary to cut it against Barcelona. Silva is capable of carrying the ball out of defense and distributing, something that would be crucial in keeping and maintaining possession, too many long balls forward would play right into Barca’s hands.

LB: Ashley Cole- At this point in time, there really aren’t a lot of high quality left backs to choose from; the only two really eligible are Ashley Cole and Patrice Evra. While personally I think that Evra is a better player, he has failed in matches against Barcelona too often in the past, so I would be hesitant in putting him in a crucial position, one which if adequately filled could go some way to stifling the threat of Messi. Cole, like most top class full backs, boasts immense attacking ability with strong defensive discipline, attributes that would both come in handy against Barcelona.

CM: Wesley Sneijder- Sneijder is an absolute must in this team, he is by quite a long way the best creative midfielder outside Barcelona, and he has experience at playing against the famed Catalan midfield. Sneijder is someone who can not only start attacks with terrifically accurate cross field balls, but can keep the midfield’s possession game ticking over with smart interchanges of passes. Sneijder is also a brilliant taker of free kicks and corners, and as we know, if there is one weakness in the Barcelona team it is their ability to defend from set pieces.

CM: Michael Essien- Essien, in my opinion, is still the finest holding midfielder in World football. His pace, tenacity and eye for goal have helped him on the way to that title, and I think he is a much more mobile alternative to Pepe in the center of midfield. In 2009, Essien’s Chelsea team were within a couple minutes of knocking Barcelona out of the Champions League, and the Ghanaian destroyer’s play in midfield was a huge part of that. Essien is a man who could disrupt Xavi and Iniesta’s passing rhythm, and if that was achieved then the whole Barcelona machine would be thrown off sync. 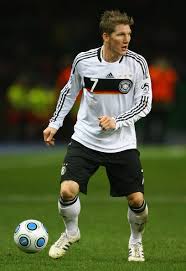 CM: Bastian Schweinsteiger- One of my favorite players, Schweinsteiger is a more experienced than fellow candidate Jack Wilshere, and much more disciplined than the aforementioned Pepe. Schweinsteiger is another who could hustle and harry the Barca midfield, and his strength and creativity in attack would also be a boon to the World XI. Schweinsteiger does not play in a team good enough to pose Barcelona a real challenge, so until he moves away from Germany we are unlikely to see him pitted against the Catalans in any really meaningful way. Sure Bayern might be drawn against them in next year’s Champions League, but surrounded by players incapable of keeping up with the Catalans, his talents in midfield would make little difference.


RF: Cristiano Ronaldo- Ronaldo’s goal threat from midfield makes him impossible to leave out of the team. In the past he has performed poorly against Barca, but the threat is still there, and at any moment he could finally explode all over Pep Guardiola’s team. Ronaldo’s pace would come in handy on the counter attack, and his ability in the air (as demonstrated in the Copa Del Rey final) would also be a useful weapon. The one weakness to Ronaldo’s game is his refusal to track back, which is why I would deploy him on the right, Barcelona don’t have a really top class attacking left back on their books, so his defensive weaknesses would be less easy to exploit on that side of the pitch.

CF: Carlos Tevez- As demonstrated by Chicharito’s performance in the Champions League final, as a striker you can’t play against Barcelona unless you are capable of keeping the ball and moving it around. Time and time again Javier Hernandez gave the ball straight back to the Barcelona midfield, and time and time again United’s attacks fell apart when the ball reached his boots. Tevez however, is equally as good at finishing as Chicharito, yet he is able to link up play as well. Perhaps most important though is Tevez’ work rate, he routinely covers more ground than anyone else, and is another player capable of disrupting Barcelona’s passing game at its very route, the feet of Carlos Puyol and Gerard Pique. 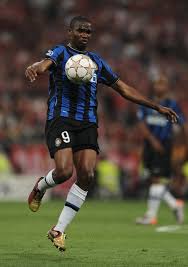 LF: Samuel Eto’o- Eto’o was arguably the most important piece of Jose Mourinho’s 2010 Barcelona blueprint. Known for the vastness of his ego, Mourinho managed to convince Eto’o to shelve his pride and play out a crucial defensive roll. In 2010, Eto’o shut down the attacking threat of Dani Alves, and also did an excellent job on both Messi and Pedro when either one got anywhere near his side of the field. On the attacking end, Eto’o is equally as effective, though in 2010 he really had very little impact up there, history shows us that he is capable of making something out of nothing. The Cameroonian clocked up thirty-eight goals last season, there is no reason why he would be unable to notch up a couple more against his former employers.

Please comment with your preferred eleven, or any questions or comments regarding mine.

2 thoughts on “A World XI To Take On Barcelona”