Apologies about the shortness this time, due to technical difficulties I was unable to view the entirety of the U21 action. INFTH will be back tomorrow with a more complete review of Matchday 6.


1. Juan Mata- One of the players expected to perform heading into the tournament, Mata really shone for 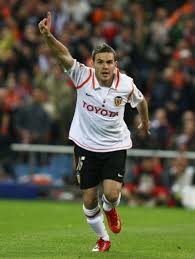 the Spanish U21s agaisnt the Czech Republic. While Adrian made all the headlines with two goals, Mata was the man who put him in position for those strikes, claiming a brace of assists. Moreover, it was Mata who kept Spain ticking over, the hub of all their creative endeavours, and the man who caused the Czech’s more problems than anyone else. Come the next round, Mata will have to continue in this vain of form, Spain have been dubbed early favorites, and Mata’s play may well decide whether or not they meet expectations, and take home the trophy.


2. Adrian- To be honest, I was not at all impressed by Adrian’s performance against England, but he certainly improved on it with a fine display agasint the Czech Republic. As mentioned above, Mata linked up well with him, teeing up two strikes, which were both take extremely well. Finishing was one of Spain’s problems agianst England in their opener, so the arrival of Adrian as a worthy holder of goalscoring responsibility is something which should encourage Spanish fans.

3. Nicolai Jorgenson- After disappointment in game one, the Danes bounced back well agianst Belaruse, and Jorgenson’s stunning goal was crucial to that success. Whenever a brilliant goal is scored, people take notice whatever the level, and Jorgenson’s stirke was certainly far, far above average. Picking up the ball ten yards into the opponents hafl, Jorgenson glided past two defeners, before smashing a rasping shot into the far corner from twenty five yards; a stupendous goal, and which proved to be the game winner. Unfortunately though, a 3-1 loss to Iceland in the group finale ended the Danish dream, so we will have to wait for the start of the European season before we see Nicolai Jorgenson score again.

4. Admir Mehmedi- I must admit, going into matchday five I didn’t know much about, Admir Mehmedi, but an impressive two goal performance from midfield did much to put him on my radar. A penalty was followed by an opportunistic goal, sealing the win for Switzerland and plaudits for Mehmedi. The Swiss number eleven is definitely one to look out for in later rounds; after their commanding group performance the Swiss are now one of the favorites to topple Spain and claim the U21 Euros. So far this tournament, Switzerland have been one of the largest contributors to INFTH’s U21 stars lists, Mehmedi arrives to complement two of last weekends flagged players; Shaqiri and Emeghara.