There’s Only One Paul Scholes

It was coming, and now it has come. After months of rumors, meetings with Sir Alex, and David Gill hints, Paul Scholes has finally called time on an illustrious career at the top.

As shy as he was brilliant, Paul Scholes lit up the English game for seventeen glorious years. Part of the “class of ’92,” (which also included Nicky Butt, Ryan Giggs, David Beckham and Gary Neville) Scholes broke into the first team in 1994, scoring twice against Port Vale in the League Cup.

Known for his blaster of a shot, terrific vision and unassuming personality, Paul Scholes has come to define Manchester United for the last fifteen years. Noticeable on the pitch due to his ginger hair, Paul Scholes has been a master of the long ball, a consistent player with a rocket of a shot, though not the world’s greatest tackler…

Ask any United fan to list their favorite Paul Scholes moments, and you’d likely be conversing for hours. The blasters against Bradford, Aston Villa and Barcelona were brilliant, the late header against City even better. For years, Paul Scholes has been the only English player of his kind, the only one able to spot an eighty yard pass, the only one always a threat around the edge of the penalty box.

Scholes is one of the only players who has managed to carve out a career on the finest footballing stage, yet managed to avoid the temptations and pitfalls that come with the celebrity lifestyle. While teammates like Wayne Rooney and Ryan Giggs spent nights frolicking with prostitutes and TV models, Scholes stayed home with the kids, ever the role model, ever the man to look up to. 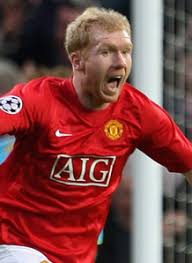 A high up official at Inter Milan once said “I told Morrati Scholes is a “mission impossible” man. It’s more than money with him. He was born just a few blocks away from Old Trafford. It’s about wearing United’s colors.” It’s about wearing United’s colors. That was really all it was ever about for Paul Scholes. He shunned the media and shied away from the limelight, concentrated on not furthering himself, but on furthering the team. England need more players like Paul Scholes, men that would never be caught urinating in parking lots, sleeping with teammates women nor brawling in nightclubs. England need more players creative enough to break down the most resolute of defenses, more players capable of picking out passes in the dying embers of important matches.

Perhaps the reason for England’s lack of success over the years has been a dearth of players of the caliber of Paul Scholes. Lampard and Gerrard have both had their moments, but total inflexibility has inhibited their progress, while maestros like Hoddle, and in particular Le Tissier, have lacked the mettle and the desire to make it at the top.

As indicated in the title, there is only one Paul Scholes, and as long as that statement remains true, English international football will remain very much second best .

One thought on “There’s Only One Paul Scholes”