Juan Agudelo- Teenage dynamo Agudelo is the name on everybody’s lips at the moment. Despite not locking down a starting spot with the Red Bulls, Agudelo has scored two terrfic goals this season, and produced a series of highly encouraging performances. Remarkably, Juan Agudelo has scored just as many National Team goals, he has netted two in three games for the Stars and Stripes. Certainly, Agudelo’s youthful enthusiasm would be useful, but Bradley is unlikely to elect to start the eighteen year old in some of the competition’s more important games. 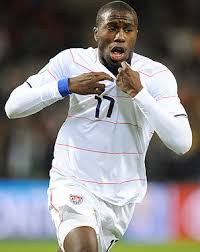 Jozy Altidore- Altidore has split opinion immensely in US Soccer circles, the American has proved himself on the National Team level in the past, but has struggled for goals and consistency more recently. Altidore possesses raw power, as well as Gold Cup experience, but his recent form has put a starting spot in serious doubt. However, Bob Bradley is generally believed to be a big fan of Jozy’s, so I reckon that Altidore will get the nod, despite lacking the technical ability of Agudelo, and the form of players like Herculez Gomez.

Charlie Davies- Davies’ chances looked significantly brighter before the injury he sustained against Colorado. The DC united man has been in red hot goalscoring form this year, though it is still unclear whether he has retained the burning speed which so defined his game pre injury. Davies is widely considered as an outsider to go to the Gold Cup, the striker is still short of games since his return from the car crash, and a flurry of early goals in MLS may not have been enough to convince Bob Bradley of his worth. Personally, I see Davies as a better man to bring than the out of sorts Altidore, he offers the X Factor in attack, as well as a decent amount of National Team experience. The sooner Davies is reintroduced into the National Team fold the better, CD9 still has a great chance of starring for the United States in years to come. 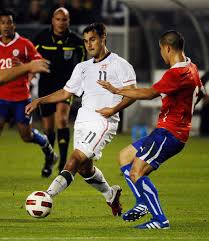 Chris Wondolowski- A star for the San Jose Earthquakes, last year’s top scorer in MLS deserves a shot at National Team play. Wondolowski possesses an impressive skill set, as well as the eye for goal which served him so well last season. This year, Wondo has five goals in ten appearances for the Quakes, a far superior record to that of Agudelo, and one almost as good as Charlie Davies’. However, Wondolowski is virtually untested at the international level, his one cap coming in a friendly against Chile last year.

Herculez Gomez- The Mexican League’s top scorer in 2010, Gomez carved himself into the minds of US fans last summer, as he played for the United States in South Africa, having scored two goals in pre-tournament warm up games. Gomez has been less prolific for his club this year, but he still remains a decent option for Bob Bradley, experienced at the national level and more than capable of playing against Mexican opposition…

Teal Bunbury- In my opinion, Bunbury is the most exciting young forward in American soccer, not Agudelo. Unlike his international colleague, Bunbury starts for his MLS club, and boasts a full season of experience at club level. Early season, Bunbury scored two goals against Vancouver that were just dripping with class, and I’d love to see him reproduce that at the Gold Cup. Unfortunately, Sporting KC’s tough schedule has inhibited his progress this term, but I still think Bunbury represents a good option for Bradley.

Edson Buddle- A very outside pick, Edson Buddle has acquitted himself fairly well playing in Bundesliga 2 for FC Inglostadt. With three goals in fourteen appearances, Buddle has helped the team climb out of the relegation zone, but his scoring total still remains quite meager. However, Buddle does boast a handful of caps, highlighted by his participation in the 2010 World Cup and his two goals against Australia in a pre-tournament warm up game. Buddle is a proven MLS goalscorer, so he would represent a safer pick than either Agudelo or Bunbury.

Who I would bring: Bunbury, Wondo, Gomez